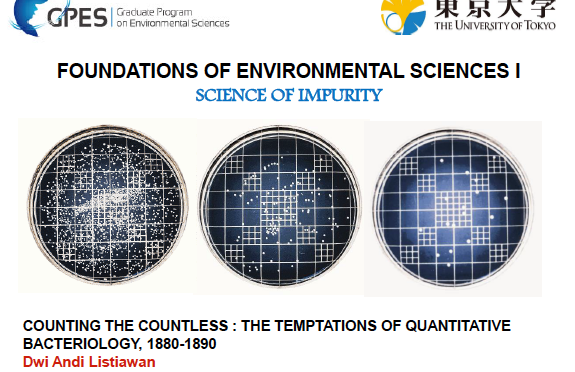 Today I want to draw your attention towards the amazing presentations that fellow GPES member Andi presented in the cause of the “Foundations of Environmental Sciences I” class in October as well as November 2014. His presentations are summaries of book chapters, each time complemented with own additions and information.

He kindly agreed to make them available (therefore please do not reproduce or distribute without his permission) so that everyone can get and impression on both the evolution of water purity analysis in this “COUNTING THE COUNTLESS : THE TEMPTATIONS OF QUANTITATIVE BACTERIOLOGY, 1880-1890″ presentation as well being able to find a brief outline on the basic structure of the Japanese electricity in post-WWII Japan under American occupation in his “THE RECONSTRUCTION OF THE ELECTRIC POWER INDUSTRY: ROAD TO SELF-RELIANCE” presentation.

Without further ado, please have a look at his great work that makes those difficult topics more accessible and comprehensible:

I. COUNTING THE COUNTLESS : THE TEMPTATIONS OF QUANTITATIVE BACTERIOLOGY, 1880-1890

II. THE RECONSTRUCTION OF THE ELECTRIC POWER INDUSTRY: ROAD TO SELF-RELIANCE 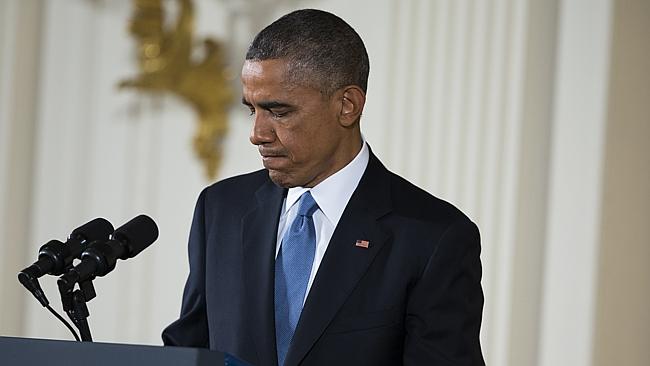 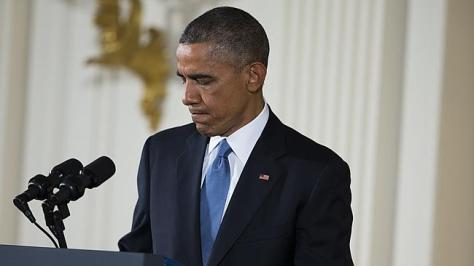 Picture retrieved from politico.com and courtesy of AP Photo

The most recent “midterm” elections in the United States turned pretty disastrous for United States President Obama and his Democratic Party).

Apart from Republicans even widening their already comfortable gap in the lower chamber of Congress, the House of Representatives, they scored a much a larger victory in the upper chamber, the Senate.

With Republicans regaining a majority in the Senate, starting January 2014, it will be almost impossible for President Obama or the Democratic to influence American policies through the ordinary legislative procedure in Congress (he can still further some of his agenda through executive orders albeit this tool is limited in scope for many policy areas).

The most crucial point is that this major political shift in the United States basically eradicates the hopes of creating a comprehensive climate change agreement at the end of next year in Paris. Republicans have generally a far more conservative stance to issues relating to energy or global warming. They actively support energy generation from fossil fuel combustion and want to limit the development of renewables (although there a regional variances between individual States’ politicians).

The most pressing question however that the results of these midterm elections bring to mind is why Americans would choose politics that are either largely dominated by radical Tea Party wing, that defends views on the far right of the political spectrum; or by large corporations that have been transforming these midterm elections in the costliest midterm elections in U.S. history by pouring billions of largely undocumented money into advertisement or campaigns that were set up in most cases to discredit Democratic candidates (it also affected Republicans, but in significantly fewer cases). The recent Supreme Court of the U.S. landmark decision Citizens United of 2010 created the foundation for this theoretically unlimited spending destined to influence election races in one way or another.

Republicans forced a government shutdown in 2013 and basically held the whole country hostage over some short-term political game. People now seem to hold the President accountable for every blunder and legislative stagnation in Congress despite the fact that Republicans practised a strategy of almost complete obstruction, far away from the former members of the GOP that were always willing to make compromises instead of just ruling out categorically every compromise out of an overreliance on a very questionable ideology. In almost every political matter, even the ones that they did support at earlier stages like trade agreements, they started to block every Democratic initiative, either in the House, where the held the majority, or in the Senate, by using the “Filibuster” tool in record numbers, unprecedented in history.

This basically made a comprehensive strategy regarding climate change, carbon emissions, energy efficiency or renewable energy development on a national level almost impossible and forced Obama to use executive orders to achieve at least some progress. I am not saying President Obama did everything right, but with regards to the uncompromising stance he faced from across the aisle at Congress made any constructive law-and policymaking nearly impossible.

The topic that dominated these midterm elections most was the general dissatisfaction of how Obama was handling this country. People want to pay fewer taxes and have less government intrusion, yet they feel unsafe because of ISIS or the Ebola outbreak in West Africa, since they criticize that the government is not doing enough to protect them. They completely eclipse that efficient government services need funds to run and those come from taxes. People hate the political and legislative stalemate in Congress, yet they seem to have forgotten that the Republicans categorically opposed most legislative initiatives not because they felt they were ill conceived, but their only agenda was complete and utter obstruction.

The United States under President Obama recovered from one the worst economic recessions in history, most large companies are more profitable than ever before, more that 9 million jobs have been added since Obama took office the deficit was reduced by half, and more than 7 million formerly uninsured people now have more affordable coverage. Yet people say the “fed up” with Obama’s way of handling things.

People say they want to decide themselves what is best for them, without government interference, without having to contribute in any way to the advancement of the nation as a whole, only viewing their lives from a narrow individualistic and opportunistic point of view in which sharing any of your wealth is denounced as “Socialism” or “Communism”. Solidarity, empathy and tolerance took a hard hit on November 4, 2014.

What is even more frustrating is that people do not realize that they are from free since large companies already dictate most of their lives. Banks dictate who gets a loan or not, food companies make their products greasier and add more sugar to basically create a notion of addicts that find it hard to quit. Large oil & gas companies exploit public land with little to no accountability (see http://www.rollingstone.com/politics/news/inside-the-koch-brothers-toxic-empire-20140924). Insurance companies deny claims on daily bases and pharmaceutical companies charge horrendous amounts for essential drugs.

The government bailouts of the largest financial institutions in 2008 and 2009 basically rendered the concept of “privatizing profits and socializing losses” into a mantra for large companies, regardless of the sector. Unlimited private enrichment and greed, without interference, accountability or social responsibility has become the philosophy for most businesses, and recently as well for a large part of the American population (white, old or without any college education) who voted mostly for the Republicans. Notwithstanding this egoistic view, many of them ignore that they get social security, Medicare or Medicaid and do not realize that the government needs adequate resources in order to continue funding these programs without which they would find themselves in extreme poverty rather sooner than later.

Therefore there needs to be a strong government to oversee, regulate and fine these companies in case of non-compliance, since although people can go to court in theory, the cost of legal action often dissuades many victims. Protection of consumers is one of the only ways to guarantee competition, the backbone of free markets. This also applies for things that do not necessarily have any monetary value at first sight such as clean air or a mitigated global warming. There needs to be oversight over and protection of natural resources that belong to the public and thus should not be exploited by private entities for personal gain, such as air, water or a functioning eco system.

Hence, from an environmental point of view, these elections were a major setback. It will be much harder now for any nationally significant environmental or renewable energy policies to pass Congress or for Obama to obtain approval for a comprehensive, legally binding climate change agreement next year in Paris that contains substantial greenhouse gas emission cuts. People need to realize that they cannot ask for change and more efficient government if they vote for a political blockade out of short-term emotional frustration.

In conclusion the American people made a short-term decision with long-term consequences far beyond their own national borders.

This commentary reflects solely the opinion of Kim and is not representative of the GPES Student Group’s opinions or views. 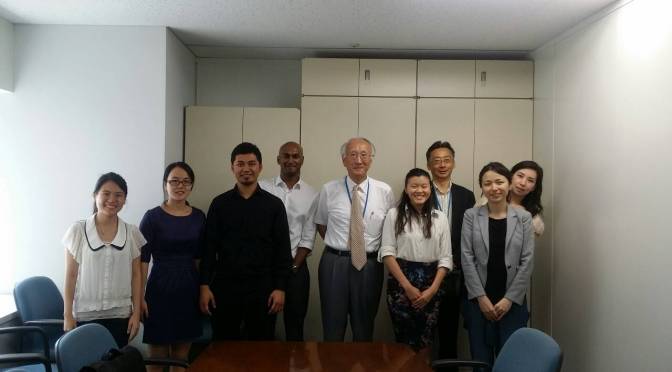 Today I want to give a short recap of our group’s recent experiences at the Institute of Energy Economics Japan (IEEJ, for additional information please see http://eneken.ieej.or.jp/en/) located in Tokyo, Japan.

First and foremost I would like to thank my “Energy Security” class teacher, Professor Nobuo Tanaka (http://www.pp.u-tokyo.ac.jp/en/faculty/professors/NobuoTanaka.htm ; http://eneken.ieej.or.jp/3rd_IAEE_Asia/cv/CV_Nobuo_Tanaka.pdf) for making this visit possible and for enabling us to get an interesting insight into the world of energy and sustainability research in Japan.

Therefore I would also like to extend my thanks to the following IEEJ researchers, Momoko Aoshima, Hisahi Hoshi and Ayako Sugini, who were kind enough to free up some of their time and listening to our many questions with patience and answering them with great competence.

In a nutshell, once can say after hearing the various IEEJ experts’ opinions is that Japan’s government will probably engage in a policy shift (http://www.meti.go.jp/english/press/2014/0617_01.html) in which reliance on nuclear power will be increased again in order to increase domestic energy supply and overall energy security. Maintaining the electric grid stable and prices low is also of utmost in importance and takes precedent over investments in renewable energy, at least in the short term.

To obtain further details on IEEJ’s findings and a good overview with regards to Japan’s energy policy, please have a look at http://eneken.ieej.or.jp/data/4700.pdf

The GPES Student Group in any way found this visit and subsequent Q&A session extremely insightful and informative.

Our deepest thanks and respect for the IEEJ and Professor Tanaka.

Follow GPES STUDENT GROUP – THE UNIVERSITY OF TOKYO on WordPress.com

The University of Tokyo

The University of Tokyo

Follow GPES STUDENT GROUP – THE UNIVERSITY OF TOKYO on WordPress.com